There is currently a movement to have Jomon archeological sites in Tohoku and Hokkaido registered as World Heritage Sites. So, what is the Jomon period exactly?

The story begins 15,000 years ago. At the end of an ice age lasting tens of thousands of years, the Earth’s temperature increased and sea levels began to rise rapidly. The Japanese archipelago, which had been connected to the Asian continent, became an island, and warm and cold currents began to circulate around the surrounding sea, creating a humid climate with clearly-defined seasons.

The range of potential food sources expanded, with nuts and berries to gather from trees in the forests, an abundance of fish to catch along the coast, and seaweed and shellfish that could be collected in the shallows and cooked in earthenware. With a stable food supply, people began to settle down and settlements lined with pit dwellings spread throughout Japan. This is the beginning of the Jomon period.

This society was sustained without the need to develop agriculture for more than 10,000 years in various parts of Japan. Such long-term persistence of peaceful societies without walls separating settlements from the outside world has seldom been seen elsewhere in the world. For this reason, the Jomon society is now gaining worldwide attention.

It had long lain buried in the soil before finally being rediscovered in the 19th century. It was given the name Jomon, meaning “cord-patterned”, because of the rope-like patterns found on items of pottery and it was initially thought that they had a simple, primitive culture. However, as excavations were carried out in various parts of Japan, pottery with bold designs, lacquerware items with delicate and beautiful sheens, jade gemstones and clay figurines in the shape of people were discovered. The level of artistry and spirituality shown by these pieces shocked people around the world.

The Jomon people believed that gods dwelled inside all objects, and that their own lives were connected to those they received from the fish, animals and plants they consumed. For this reason, they only took enough to ensure their own survival. From this point of view, it is easy to believe that they saw the cutting down of trees and pulling up of grass to cultivate farmland as an attack on the gods of the natural world. Forests have survived and ecosystems have been preserved for such long periods because these people chose not to engage in agriculture. This reverence to nature and the philosophy of symbiosis persisted into later Ainu culture and forms the basis of their spiritual outlook to this day.

The Hakodate Jomon Culture Center is surrounded by Jomon archeological sites. Looking out onto the sea, with the divine Mt. Komagatake towering in the background, many Jomon people chose this area to establish their settlements.

The center has a large collection of excavated items from the settlements that show the spiritual culture of the Jomon people. A clay slab found in an adult grave from 6,000 years ago was found to have the impressions of a child’s footprints. Could this be a reminder of a child who had died?

Another grave from 3,500 years ago was found to have a hollow clay figure inside, coated with lacquer and adorned with a geometric pattern. Looking at it, one wonders if there is some mythology connected to this mysterious pattern, or if the fact that the figure was buried while broken signifies a prayer for rebirth after death.

We can try to imagine the mysterious messages from ancient times. From the impressions of children’s footprints, we can feel the affection of the bond between parents and children, and we can wonder about the urgency of the desire for rebirth represented by the clay figurines. Despite the volcanic eruptions and chilling climate, humankind has survived in this area across the ages and into the present day. 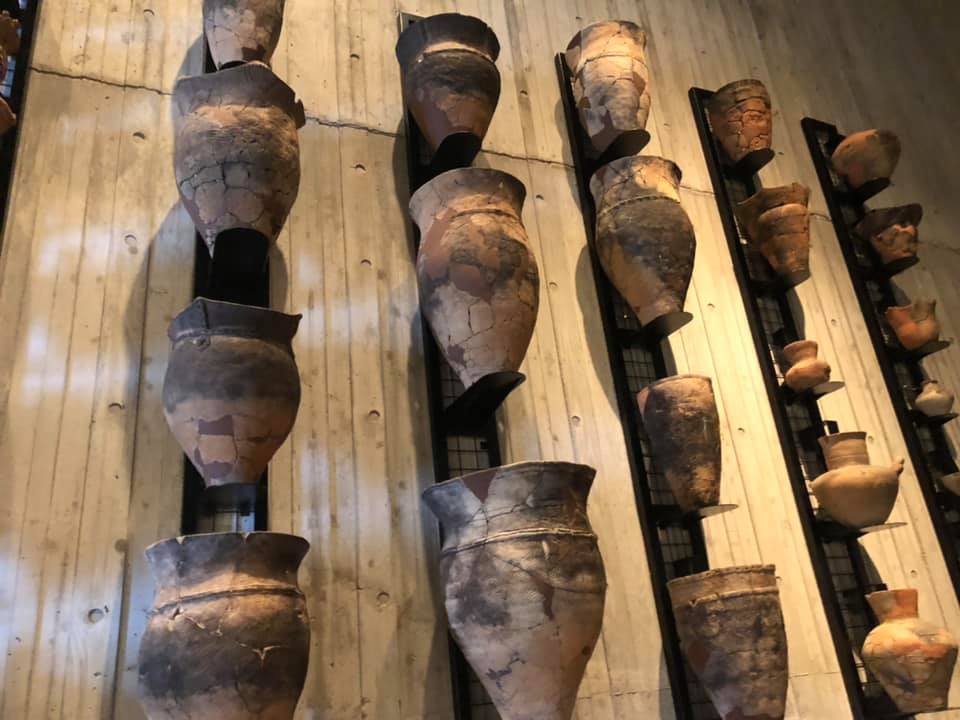