Come and see an ancestor of Josh Dun (the drummer of Twenty One Pilots)!

Have you ever heard of Edwin Dun?  His name is well-known among people in Hokkaido, Japan.  Employed by the Japanese government’s Hokkaido Development Commission as an agricultural advisor, he left the United States for Japan in 1873.  Imagine what a great decision that was to make!  At that time, Hokkaido was a largely undeveloped island, where wild deer, wolves and bears were roaming around.  The recorded population of Sapporo, the capital city of Hokkaido, was only 624 in 1871 (now it’s about 2 million).

Well, even if you don’t know about Edwin Dun, you might have listened to the music of Twenty One Pilots. They are an American rock band, whose drummer is Josh Dun.  His drumming style is wild and unique — like a wild bear playing with a new toy drum set.

Maybe that’s because his roots are in Hokkaido, which is famous for brown bears!

Josh introduces Edwin Dun as his “great, great, great, grandfather” on his Instagram and writes “Him and his Japanese wife are responsible for any Asian looks I have”. 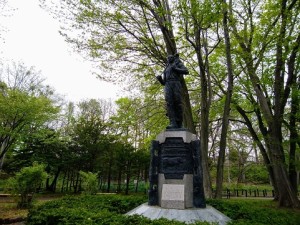 The statue of Edwin Dun in Edwin Dun Memorial Park.  He has a lamb on his shoulder.

There is an “Edwin Dun Memorial Park” in Sapporo, Hokkaido, with the Edwin Dun Memorial Museum and a statue of Edwin Dun.  The monument was erected to “immortalize Dun’s most distinguished services”.  The plaque in front of the figure explains that he took leadership in developing farming in Hokkaido and Hokkaido’s prosperity was truly built upon Dun’s dedication in many fields. He also worked for the development of Japan’s diplomacy, industry, and culture until his death in 1931 at the age of 84.

Edwin Dun Memorial Park is not a big park, but it’s a good place for relaxing under a canopy of green leaves or viewing cherry blossoms in spring.  As a local person, I don’t want it to be over-crowded with people, but at the same time I’m hoping that Josh’s fans would come to the park to see his ancestor and to learn about Dun’s achievements, and the roots of agriculture and animal husbandry in Hokkaido!