A trip in search for Kombu kelp, in southern Hokkaido 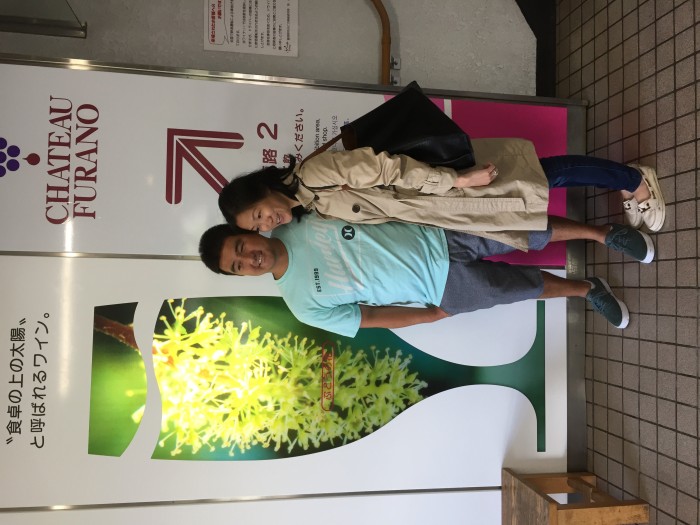 The customers this time were Mr. and Mrs. Rick

Kondo from Oahu, Hawaii, who celebrated their 5th wedding anniversary this year, and their parents, Mr.
and Mrs. Ted Kondo. Rick is a fourth-generation Japanese ENT doctor, and his wife, Cathy, is a
Chinese-American medical coordinator working for a Japanese pharmaceutical company. She was the de facto tour leader.

American having his roots in Yamaguchi Prefecture
of western Japan. Upon graduating from high school, he volunteered for the
Navy and worked for an aircraft carrier based in Yokosuka and Sasebo,
Kyushu after WW II. He got a scholarship after his discharge and went on to
college. After graduation, he worked for the state’s regional forest manage-
ment office until the official retirement age. Now, in Hilo on the Big Island
of Hawaii, he is enjoying a comfortable life with his dear wife, Milly. 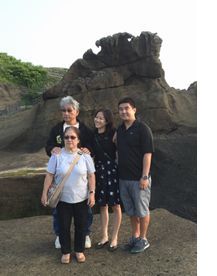 His hobby is farming, and he has the skill to
cultivate taro, and ships it to a local trader.
He also grows a variety of crops, and he bought
a lot of seeds wherever available during the tour.

The young couple traveled to Hokkaido for the
first time last summer, but there were several
places where they could not go due to the
typhoon that hit Hokkaido then. This time they
visited Hokkaido again together with their
parents to get revenge against the typhoon
which hampered their previous trip.

This tour lasted 10 days in June. We visited the famous city of Furano to 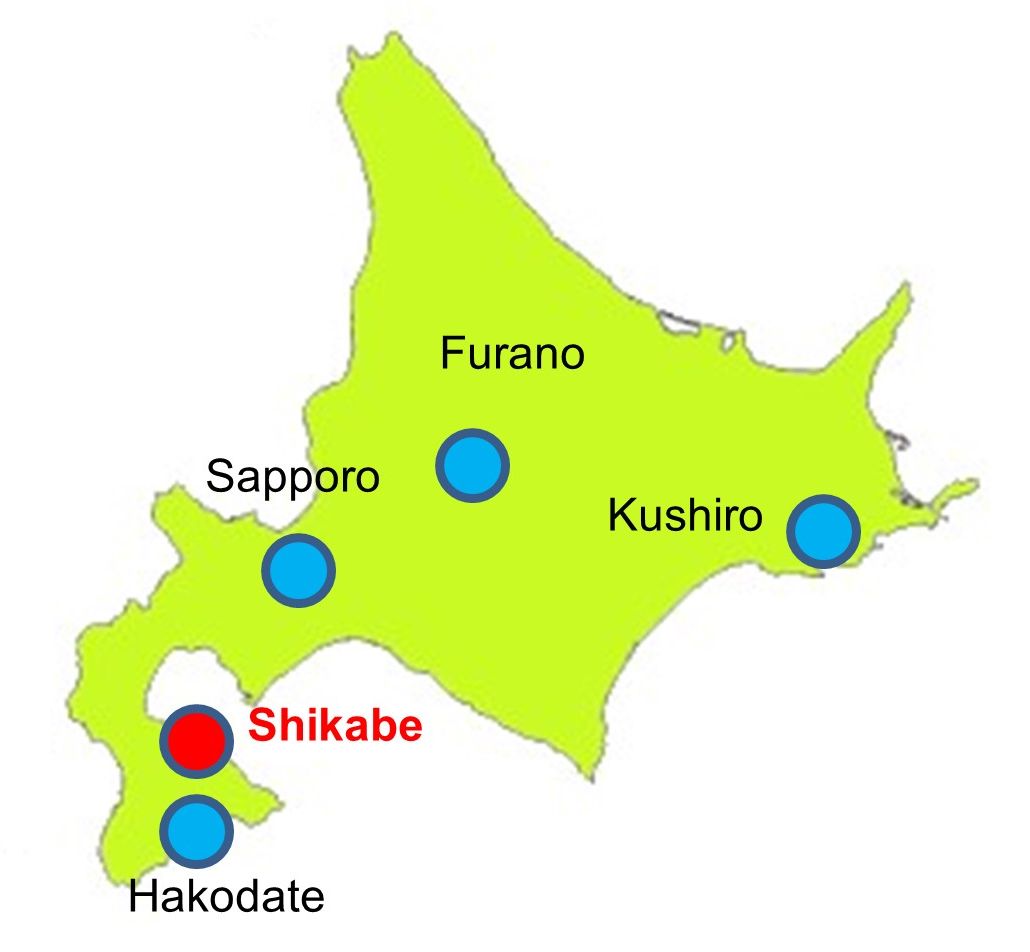 In addition to the well-known travel desti-

nations mentioned earlier, the biggest high-
light of the custom-made tour planned by us
was “A trip to get to know kombu kelp deeply”
in Shikabe in southern Hokkaido. Here, people
are blessed with abundant marine resources
and onsen hot springs.

What did the customers learn and feel there?

weed. While 90% of kombu in Japan is harvested and manufactured into
dried products in Hokkaido, Shikabe belongs to one of the few areas of ​​”Ma-
kombu” production, which boasts the highest quality. “Ma” is the prefix
which denotes authenticity, and the kombu from this area is given as the
yearly present to the Imperial family.

By the way, “dashi” or broth is indis-
pensable for Japanese food. “Dashi” is
an umami ingredient derived from
natural ingredients such as kombu kelp, dried bonito, and shiitake mushrooms,
and the word umami is now included in
the Oxford English Dictionary. The source of glutamic acid, which is one of the “three major elements of umami,” is kombu.

After arriving at the site, they boarded a fishing

boat and went to the kombu farming site to
observe the growth of it in detail. After that,
they called on a kombu fisherman’s house to
learn about the toughness of making products
with the whole family. At noon, they went over to a restaurant run by

fisherman’s wives to try their hand at making kombu
rolls stuffed with capelin. After the cooking training,
they enjoyed a heartfelt service of excellent local
seafood dishes such as fresh kombu salad, seasoned
greenling with kombu dashi, miso soup containing

special sticky kombu, and simmered flatfish.
They said that kombu is commonly used in Hawaii as
well, but they were very happy to know all about
kombu “from growing to cooking”.

After a delicious meal, Ted, who had the air of an old Japanese samurai and

didn’t usually flap his gums, said, “I heard that one of my ancestors worked
on prawn farming in the past.” Later, after searching on the internet, I
found a person of the same family name, who established Japan’s first
“prawn farming technology” immediately after WW II and was a pioneer

in the subsequent aquaculture industry. The man I found was actually none
other than his granduncle!

Fisheries Agency of the Ministry of Agriculture, Fishery and Forestry. Even
though the type of fishing is different, we learned that the spirit of aqua
farming fostered by his granduncle was inherited in a way by kombu farmers
here in Shikabe, and we were all impressed by the wonderful coincidence we
experienced here.

Hour by hour a tour guide wants to please his/her customers, and always

keeps a sharp eye out to find anything appropriate.

the internet, I might be able to find something I needed. And I found I was
correct. The thing I found there was his granduncle’s autobiography
puplished in 1992. It was written about a man who devoted his whole life to
developing and consolidating “prawn farming” technology. However, because
the book was out of print, I searched it on a net auction and found only one
on sale.

Gee, how could I hit upon such a rare book! I immediately made a successful
bid for this one of a kind book, fearing that someone might get it before me.

The remaining problem was whether the book would arrive at my home
before their departure. Otherwise, I decided I would mail it.

On the final day, during lunch at a soup curry shop in Sapporo city, my

wife contacted me saying, “the book has just arrived”. I asked her to
deliver it as soon as possible. Finally, I managed to get this book before
my customers’ departure. When I presented the book to Ted, he asked me
what it was in surprise. I explained about the process of obtaining the book
to make him understand my intention. He found a picture of his father in the 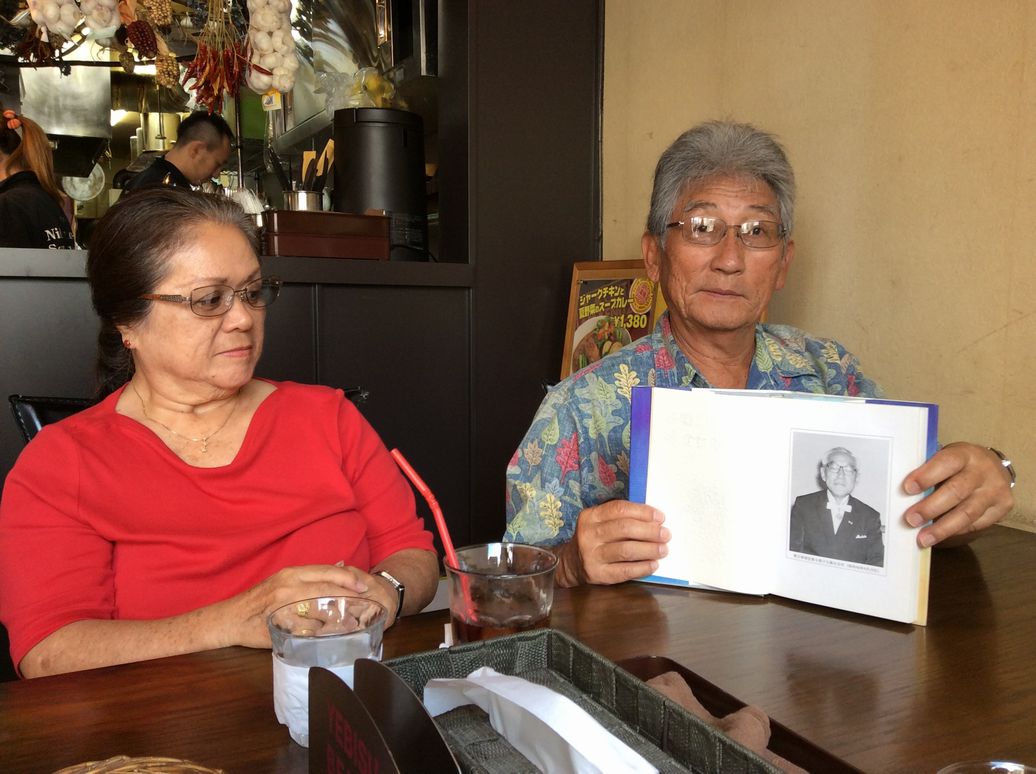 book, standing side by side with his
granduncle. Ted looked very impressed
and happy. Taking a look at his expres-
sion, I was very much satisfied and
relieved. After returning to Hawaii,
Cathy informed me that her father-in-
law proudly showed off this book to all
the people who visited his house.

6 Visit to the guide’s house

I’ve already written that Ted loves farming, and my wife has the very same 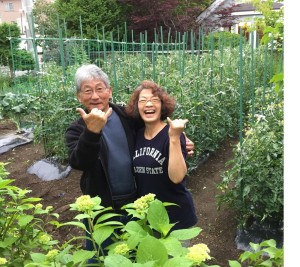 hobby as well. When I told him about her one day during the trip, he requested me to take him to see her vegetable field, so I took them to my
house on the very last day. There he met her, and they built quite a rapport

with each other. No need to mention
that her gift of seeds (eggplant, cucumber, bitter gourd, etc.) made him very pleased.

“thank-you” from customers throughout a tour. For this purpose, I always try to do my best.

(The names in the article are pseudonyms.)