Experience Contemporary Ainu Art at the Foot of Mt.Hakkenzan

An hour’s drive south from the center of Sapporo, beside a vineyard, is the

At the Hakkenzan Gallery, prints by

musician, and poet, are on display

along with works by a local potter.

Today, a mini-concert will be held at

the gallery by “Polo”, a group that 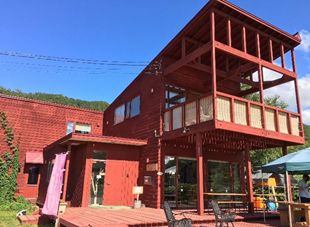 The mountain that looks like eight swords attached to each other is Mt.

Hakkenzan, and the Hakkenzan Gallery is located in the grounds of the Hakkenzan Winery at the foot of the mountain. From the gallery, you can enjoy a 360-degree view of nature as well as Mt.Hakkenzan.

Many of Mr. Yuki’s prints feature

bears, which he says are kamui, or

“Ainu Art Project”, which has been

telling with the members of the group at an event held at the Louvre Museum.

In today’s concert, there were solo

and ensemble performances of “tonkori” and “kantele”, and Mr. Yuki talked about his own creative “yukar” or Ainu oral story, with the ensemble in the background. The story was about a bear cub being raised by a human mother. 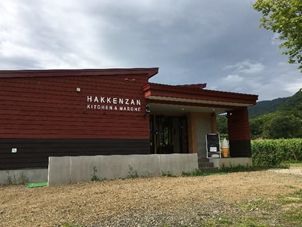 Next to the Hakkenzan Gallery, there is

a restaurant and a store where you can

enjoy dishes made with local ingredien-

ts and buy wine. There is also a walking

path through vineyards and biotopes on

the premises, where you can enjoy

contemporary art in the midst of nature.

Mr. Yuki had the following to say about the Ainu tradition. The Ainu call

nature “kamui” or deities and have the sense that they are always surrounded by deities, and this sense is what is wonderful and what he wants to preserve as tradition. 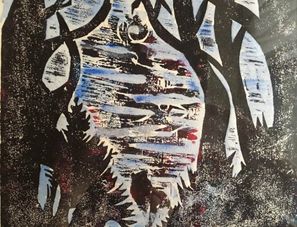 The title of this print is “KEHAI

in this work with my own feet and feel something. I also imagined myself in the future as a guide, telling people about it. “Don’t just dream about it, come to the forest!” I felt as if I could hear a voice from this work saying these words.