The Joy of Rakugo

The COVID-19 pandemic, record-breaking heavy rain, and a typhoon―at

a time full of ominous news, what people truly wish for may be to be able to smile or laugh without thinking about anything.

If it’s “standup- comedy” that makes people laugh in the US, then in

Japan, it’s “sitting-down comedy” or “Rakugo” that does it. Rakugo is one of the traditional Japanese stage arts of making people laugh.

Given valuable free time that presents itself unexpectedly due to the

pandemic, we guides waste no time to polish our knowledge and skills. As part of such efforts, a “Rakugo Seminar” was held. Many guides may wish to master the art of making people laugh, but it is not easy to come by. Although it must have taken a long time and great effort to acquire such knowledge and skill, two fellow guides volunteered to share them with us.

stage for a rakugo-ka (a comic storyteller).

The first half of the seminar was “zenza” or an opening act, which this

time was a presentation titled “The Joy of Rakugo” by a long-time rakugo fan, Dosanko-tei Megu chan (his stage name as an amateur rakugo-ka). He started off by explaining the reason of how he was first captured by the charm of rakugo. Then he moved on to present the history and inside stories of the art, followed by the introduction of “yose” (storyteller theaters), and the financial state of rakugo-ka. He ended it with the introduction of his favorite storytellers by category picked by his unique criteria.

(a rakugo storyteller of the highest rank) and the recommendation of some rakugo stories easy to tell in English. When we heard about one rakugo-ka who has about 200 different stories in his repertoire and he can tell 35 of them with no preparation at all, each of us looked back on ourselves and wondered, “How many pieces of ‘guide talk’ can I do just like that?” The topics in the presentation, which were full of helpful tips for guides, were diverse and never lost the audience’s attention throughout. Above all, it was filled with so much love for rakugo.

Just after we became filled with knowledge on and love for rakugo, our

master English rakugo-ka came on stage! It was Master ”Katsura Shigaku.” (He took the name from a prominent rakugo-ka “Katsura Shijaku.”) 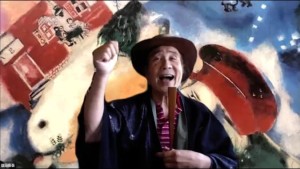 The structure of rakugo storytelling is makura (the prelude) first, followed

by the main story and concluded by ochi (the punchline). The prelude consisted of the origin of his stage name “Katsura Shigaku,” a song “Furusato (hometown)” sung with gestures, how people react differently to things depending on which prefecture they are from, and so on. By the time it ended, he had successfully grabbed our attention.

Now, the main story “White Lion” began. With a Japanese fan used as a

microphone and a towel as a memo pad, a can of beer, etc. He told the story in a calm tone, never losing his cool, as he showed his great theatrical skills such as the mimicking of the roar of a tiger. We gradually became entranced by his magic, and before we knew it, we were already at the punchline. Want to know how much we enjoyed the world of his rakugo? Why don’t you just look at these smiling faces?

rakugo: to act out a different personality despite his usual, shy, character, and to incorporate into his performance the pathos embodied by his favorite rakugo-ka, Katsura Shijaku, who induces laughter and tears at the same time.

Many guides find it difficult to make people laugh. Not everyone can

perform rakugo storytelling in the way we saw in the seminar, but at least each element of rakugo can be a useful tool for guiding, including telling short episodes, acting, mimicking, and using small objects such as a Japanese fan and a small towel as something else, as well as the background knowledge of rakugo. All of us had fun at the seminar and felt recharged. As it came to an end, we felt like visiting a real yose stage next time.

You know what? Master Shigaku performed rakugo for the first time at his

school when he was only in the fifth grade on Parents’ Day with a bunch of parents watching him!

Born to be a rakugo-ka or what?