Full-scale development in Hokkaido started about 150 years ago by the Japanese. Until then the indigenous people, the Ainu, made their living by hunting and gathering. Japanese settlers started to reclaim the wilderness, making farmland to supply food to the increasing population in Japan at that time. Now, Hokkaido is the largest agricultural producer in Japan. The agriculture industry in Hokkaido started by inviting many agricultural experts from the US and European countries because the subarctic climate in Hokkaido was more similar to the climate in the US and European countries than to the temperate climate in the rest of Japan. The invited agriculture experts taught the Japanese western-style farming. Hence, Hokkaido agriculture is characterized by livestock and mechanized, large scale, dry-field, crop-centred farming, which is similar to the farming in the US and European countries, and is quite different from the other areas of Japan where farming is rice-centred and done at a small scale.

I welcomed some guests from the Philippines in the summer. The tour included a farming experience. We visited a dairy farmer for a first-hand experience of milking and butter making. The daughter of the farm owner explained about the history of the farm, how to milk a cow, and how to make butter before we started. At one point she explained that they had transferred fertilized eggs from Japanese Black Beef cattle into several milking cows, to produce beef cattle, because of this breed’s high price. My Philippine guests seemed not to have heard about embryo transfers between different species. As I translated her Japanese into English, they appeared to be surprised.

Milking is carried out by machines today, but we milked the cows the old fashioned way — by hand. I told them if they milked skillfully to produce milk, the cow would show them gratitude, but if they did it awkwardly and failed to produce milk, the cows, who would be discomforted, would kick them. So, I advised them not to stay behind the hind legs. First, they were nervous because the cows today are so big, as they weigh about 700kg. However, my guests managed to do it. There were no kicks, and they were all excited and satisfied.

Butter making is simple. Put fresh cream and salt, if you want, into a bottle, put a lid on it, and shake the bottle fiercely. Some guests performed a dance step with their shaking. Everybody was laughing and kept shaking until finally they were able to produce butter.

Thanks to my previous work in the agricultural department of the prefectural government of Hokkaido before becoming a tour guide, I could offer detailed information. Everything went very smoothly.

They enjoyed the tour a lot because foreign guests tend to prefer to do activities. Although most of the tour was sightseeing, it gave them a unique and unforgettable experience and a little variation in their sightseeing tour. 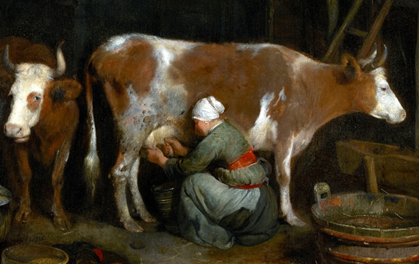