Japan is a land of mountains and home to 10% of the world’s active volcanoes. The four tectonic plates that lie under its surface are constantly moving and colliding, giving rise to volcanic activity. It is thanks to this dynamic terrain that the people have been blessed with beautiful views of volcanoes and caldera lakes. The heat under the Earth’s surface also created the country’s hot springs and bathing in the midst of such incredible scenery is one of the quintessential joys of life in Japan.

Kawayu Onsen is a town built on one such hot spring. The local people informed me that I was standing in a caldera and when I looked around me, I could see that it was true. Encircled by mountains with Mt. Io dominating the scene, the landscape features craters, caldera lakes and hot springs, while the distinctive smell of sulfur hangs in the air.

It’s clear why the indigenous Ainu people in the area gave Mt. Io the name Atusa-Nupuri, or “bare mountain”. The area around the crater is completely clear of vegetation, and the entire debris-covered surface of the mountain is gray. Steam roars as it billows from fumaroles, clusters of bright yellow sulfur crystals are scattered around, and a sulfuric odor fills the air.

Mt. Io may look every inch the “bare mountain” near the crater, but the colors that spread around its base create a vibrant landscape. Only hardy plants that can withstand the volcanic gases and high acidity are able to grow here. Heading down the mountain, creeping pine come into view. These plants tend to grow sideways on high mountains, but here at an elevation of 150 meters they reach towards the sky. Next are the clusters of marsh tea. The white flowers of these rhododendrons unique to Hokkaido mean first love in the language of flowers as they blossom in the spring. Beyond the creeping pine, marsh tea and the Sakhalin spruce lies Kawayu Onsen, a hot spring town built around the hot water that spouts from Mt. Io.

Sulfur mining began in the area around the time of Japan’s modernization in the 19th century, for use in matches and as raw material for explosives. A sulfur refinery was built on the mountain and railway lines were laid as more sulfur was transported to be used by people in distant areas. The hot springs that well up in the river near the refinery gave the workers in the mines and factories a place to bathe and relax after a hard day’s work. Kawayu Onsen also became popular among visitors from far and wide as a hot spring resort that continues to this day, long after the sulfur supply has been exhausted and the mine closed down.

The rising steam from hot spring town area brings sulfur molecules into the air. The locals say there’s no point in buying expensive electronics here because it causes machinery like computers, televisions and even the ATM in the local post office to break down in just a few years. There’s even a story of a metal nail being dropped in a bathtub and melting away entirely after just a few weeks. I asked the owner of a ryokan (inn) if this air that rusts machinery and bathwater that melts metal was harmful to humans. Their proud answer was, “Sulfur is a foreign object to humans. When it touches the skin, it reacts and heats up. The body’s temperature rises and the immune system gets stronger, it makes us healthier!”

This whole area, including the hot spring town and the vegetation that spreads out from the “bare mountain” is like a volcanic museum that allows us to witness the Earth’s dynamism, while the locals are extremely proud of the quality of the hot spring that the volcano has blessed them with. 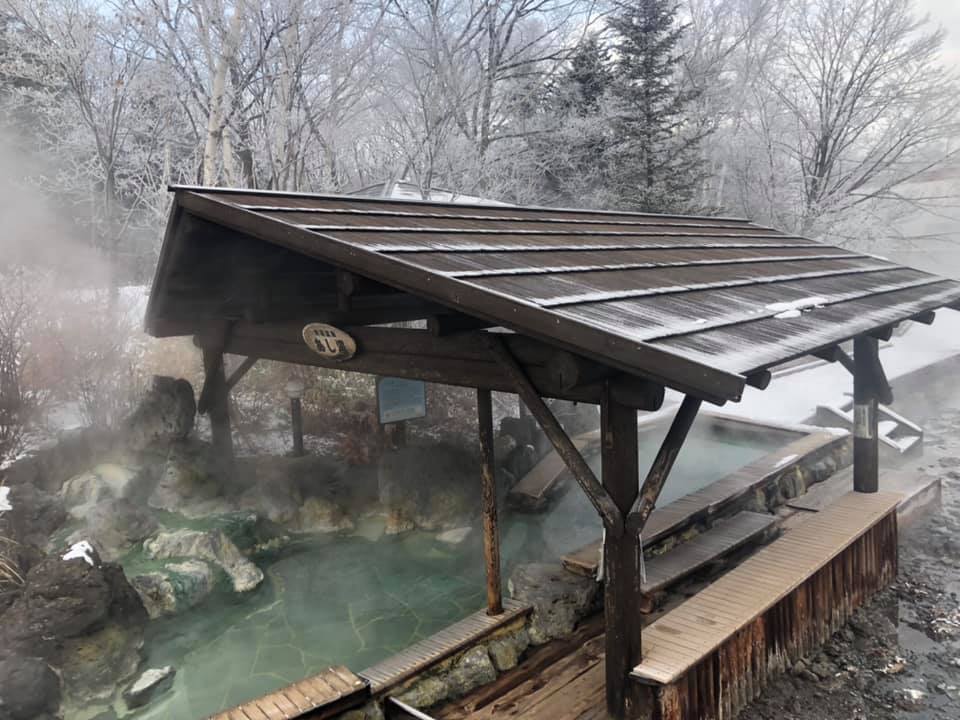